The landmark Federal Revenue Sharing Program was put in place which provided badly needed revenues for municipalities throughout America.

After years of concerted effort, led by the National League of Cities, on September 15, 1972 House and Senate Conferees agreed on the details and the landmark State and Local Fiscal Assistance Act of 1972 was readied for final action. The New Jersey League of Municipalities coordinated the efforts of Garden State local officials to convince New Jersey’s Congressional delegation to support the Federal Revenue Sharing program. In its first year, the program distributed some $5.821 billion to the States and municipalities of America. New Jersey was awarded a total of $163.6 million, of which our State’s municipalities received $109.1 million.

Open Public Meetings Act affirms that (except in rare cases involving the public’s interest, personal privacy or individual rights) “the right of the public to be present at all meetings of public bodies … is vital to the enhancement and proper functioning of the democratic process …” This opens the Legislature’s Committee process to greater public input, leading to the modernization and expansion of the League’s lobbying program.

Laszlo Ispanky, a renowned porcelain sculptor, was commissioned to create a commemorative piece that was unveiled at the 60th Annual Conference. The orb featured the League's logo at that time and a key to symbolize the key to Town Hall.

The League continued to make a major impact on planning legislation important to municipalities. The comprehensive revision of New Jersey's Planning Zoning Statutes, enacted in 1975 as the Municipal Land Use Law, was produced by a League committee which is still functioning currently. The Municipal Land Use Law has been recognized nationally as a model piece of legislation. Several major amendment packages have been recommended by the Drafting Committee over the ensuing years, all of which have become law. 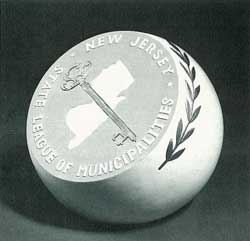 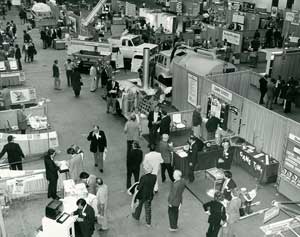 New Jersey's second broad base tax - the income tax - was signed into law in 1976 and with it came $50 million in revenue sharing for municipalities plus nearly one billion dollars in taxpayer relief through increased aid to education.

From 1977 to 1996, the League’s Annual Conference was headquartered in the Atlantic City Convention Hall.

For the first time the League acquired its own property when a Victorian brownstone at 407 West State Street was purchased. 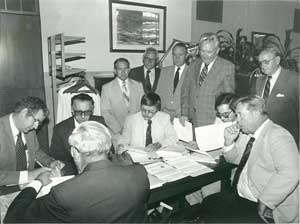 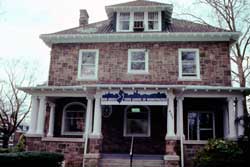 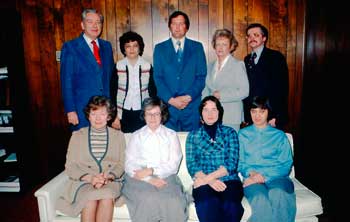