When 28-year-old Ferdinand W. Roebling, Senior, purchased his home at 222 West State St. in 1870 from U.S Senator John P. Stockton, little did he know that the property was destined to one day become the headquarters for the state’s pre-eminent association serving all of New Jersey’s municipalities.

In 1870, the building was sold to Ferdinand W. Roebling, Sr., by U.S. Senator John Potter Stockton, whose father, Robert, had also served in the Senate and as President of the Delaware and Raritan Canal. His father, Richard, preceded him in the Senate, after which he served in the House of Representatives. And his father, also named Richard, had represented New Jersey as a Member of the Continental Congress, where he became a signatory to the Declaration of Independence.

The home’s new owner was the second son of John A. Roebling, the manufacturer/inventor of wire rope and the designer of the Brooklyn Bridge. Ferdinand, Senior, the financial and business genius of the John A. Roebling’s Sons Company family firm, was also the driving force behind the establishment of the Trenton Free Public Library and the man most responsible for the design and construction of Trenton City Hall. Three generations of Roeblings resided at 222.

The financing package likely would have intrigued Ferdinand Roebling. As secretary/treasurer of the Roebling Wire Company, which his father founded in Trenton in 1849 at the height of U.S Industrial Revolution, Ferdinand Roebling was the business’s financial officer.

The technology behind the business was the senior Roebling’s invention of wire rope, or steel cable, which had far-reaching applications for the transportation, communications and construction industries in a growing America. He chose Trenton as his new location to be close to the Cooper Iron Works business, his major wire supplier, and because of the city’s proximity to railroads, waterways and thriving East Coast markets.

John Roebling is best remembered for the application of his invention in suspension bridges, culminating in his design of the Brooklyn Bridge. John’s sons, Ferdinand, Washington, and Charles, were all involved in carrying on their father’s business legacy. They incorporated after their father’s ironic death from tetanus poisoning, which he contracted during the early stages of the Brooklyn Bridge’s construction.

Over its lifespan, the Roebling Wire Company/John A. Roebling’s Sons Company supplied steel cable for more than two dozen suspension bridges in the United States, Canada, and South America. The company was sold to the Colorado Fuel and Iron Company in 1952, which, in turn, was sold to the Crane Corporation in 1969. All Roebling plants were out of operation by 1974.

The three Roebling sons all built homes along West State Street in the late 19th and early 20th centuries, but the residence at 222 West State St. is the only one that remains standing. The home was vacant for three decades, but not without controversy. An attempt by a developer to demolish the building, which is listed on both state and national Registers of Historic Places, was rebuffed in the 1980s. The city acquired the mansion in the late 1990s through eminent domain.

The New Jersey State League of Municipalities purchased the 5,000-square-foot structure from the City of Trenton in 2005 and restored much of the exterior and first floor. The second and third floors were transformed into modern office space. Additionally, approximately 11,000 square feet of office space was added to the rear of the building. The League occupies about half the space and lease the remaining space to tenants. A parking lot is also accessible at the rear of the property. It’s a major move for the League and a historically significant undertaking for the city. And, it was all made possible with a combination of public and private financing and a strong partnership among the New Jersey Historic Trust, EDA, Wachovia and the League. 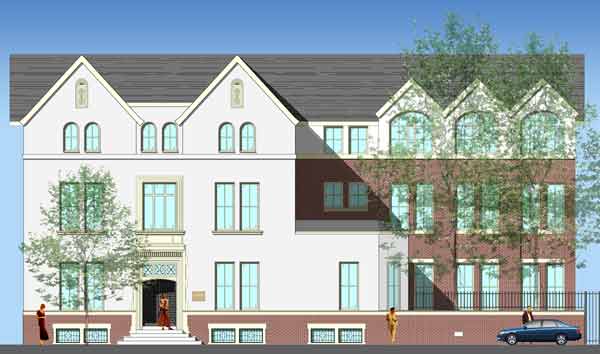