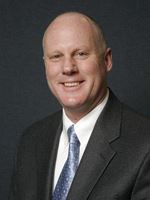 The League’s 2nd Vice President, Mayor William Mayor Chegwidden, has served on the NJLM Executive Board since 2013.

As Mayor of Wharton since 2001, he has dealt with every aspect of Municipal government, including the Office of Emergency Management, Local Emergency Planning Committee, and Public Safety Director. Prior to that, Mayor Chegwidden was a Councilman for the Borough from 1995 to 2000, during which time he was Council President in 1997 and 1998. He also served as a Morris County Freeholder from 2007 to 2013.

A teacher at Morris Hills Regional District, Mayor Chegwidden specializes in social studies, economics, and history while helping with extracurricular activities such as Junior Statesmen of America and coaching football, track, and wrestling. He earned an MA and BA from East Stroudsburg University in East Stroudsburg, PA, and an AA degree from the County College of Morris.